A Keeper of Traditional Chinese Art 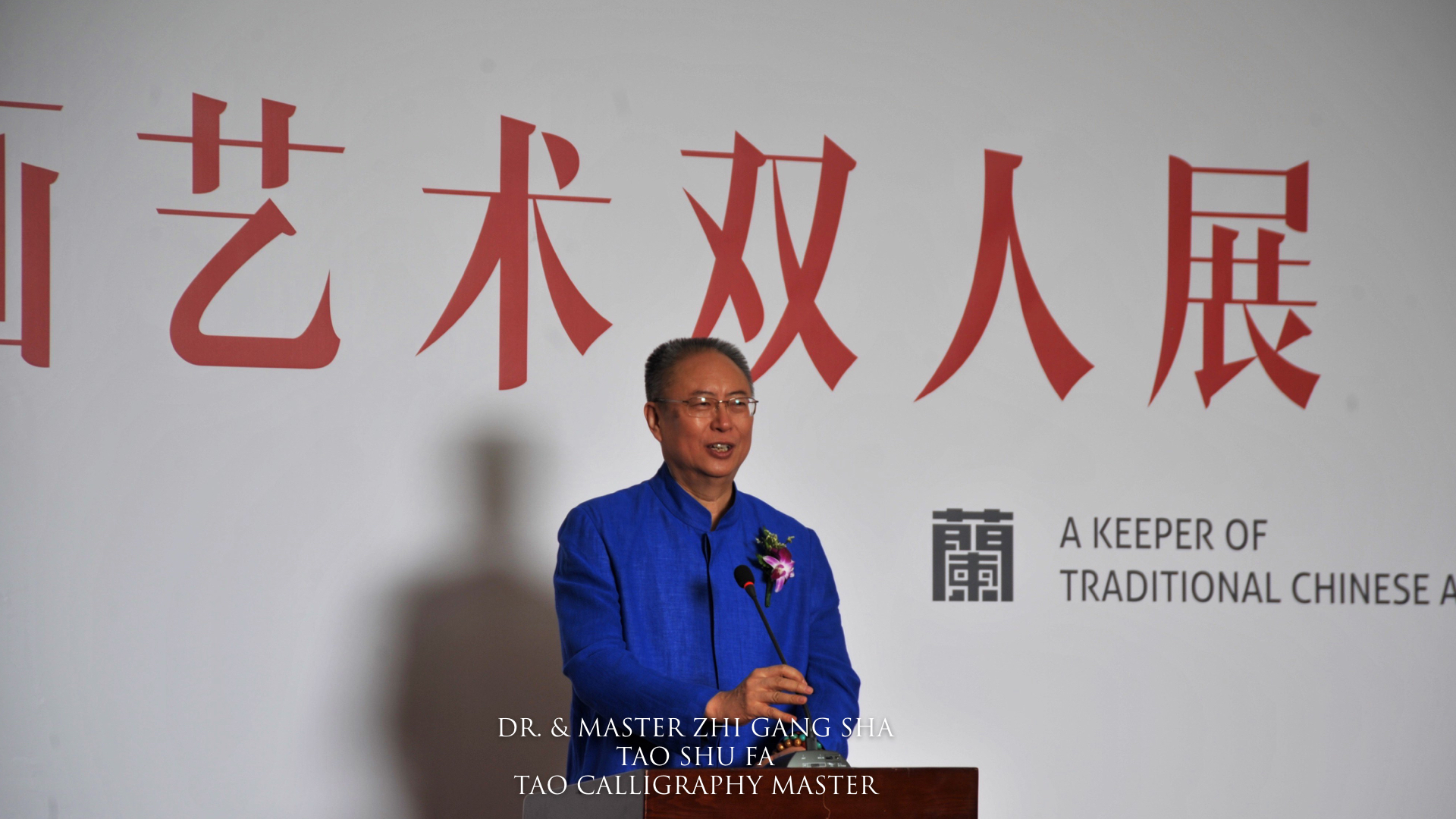 On March 18, 2017, the State Ethnic Academy of Painting and Heilongjiang Artists Association happily jointly organized a unique dual exhibition, featuring Tao Calligraphy by world-renowned Chinese Calligraphy Master Dr. and Professor Sha Zhigang and “Lan (Orchid): A KEEPER OF TRADITIONAL CHINESE ART” by famous artist Jia Chang. The opening ceremony and the exhibition were held in the Cultural Palace of Nationalities.

Many well-respected government officials, as well as artists, were present in the grand opening ceremony, including Professor Liu Dajun, CPPCC National Committee member and Chairman of China Association of Yi-Jing (the Book of Changes); Professor Wang Lingxu, member of the standing committee of the CPPCC National Committee, Chief Cultural Executive of the Cultural Palace of Nationalities of the State Ethnic Affairs Commission of the People’s Republic of China, and Dean of the State Ethnic Academy of Painting; Mr. Zhang Jieting, CPPCC National Committee member and Vice Chairperson of the China Society for Promotion of the Guangcai Program (CSPGP); Mr. Lu Yushun, Executive Vice President of the China National Academy of Painting; Mr. Chen Shuxian, Chairman of China Green Foundation and former Vice Deputy Director of the State Forestry Administration of the People’s Republic of China; Mr. Xu Xun, Vice President of the Chinese Institute of Prose and Vice Chairman of the Chinese Coal Mine Writers Association; Professor Liu Rendao, Beijing Normal University and Director of the Calligraphy and Paintings Committee of China Academy of Cultural Relics; Mr. Zhang Qingzhi，Director of China Artists Association and Dean of China Overseas Chinese Academy of Painting; Mr. Cao Dezhao, former Chairman of Tianjin Artists Association; and Chinese arts and crafts masters such as Mr. Feng Jie, Mr. Shu Lihong, Mr. Li Wenyue, and Mr. Li Zhenyu, Managing Vice Chairman of Heilongjiang Artists Association. Along with them, other leaders and special guests from home and abroad attended this grand opening ceremony.

In this dual exhibition, Dr. and Professor Sha Zhigang shared forty of his latest Tao Calligraphy writings with his beloved Chinese people in Beijing.

沙志刚从小就受到中国优秀传统文化的熏陶，师承一笔字传承人李秋云，学成一笔字书法。在旅居海外的几十年间，他一直把中国的传统文化作为他生存发展的根本，在传播中华文化的道路上越走越宽。
Dr. and Professor Sha was brought up and nurtured by the magnificent ancient Chinese art and culture. He has learned this unique Chinese Calligraphy form, Yi Bi Zi (Oneness writing), from Professor Li Qiu Yun, and has become her one and only Yi Bi Zi Lineage Holder. Dr. and Professor Sha has lived overseas and traveled globally over the last 25 years. He has dedicated his life to promote and carry forward Chinese art, culture, and heritage around the world. This has greatly elevated the influence of Chinese culture and heritage in the world. He is the creator of the very unique Tao Calligraphy. Through Tao Calligraphy, he has spread this ancient art and cultural treasure of Chinese Calligraphy in a revolutionary way. His love, passion, and respect to ancient Chinese culture has been the foundation of his success and flourishing as an overseas Chinese. He has widely expanded the path to spread Chinese culture.

Tao Fa Zi Ran (which means follow nature’s way), as well as Tian Ren He Yi (which means Heaven and human join as one), are the two essentials of Taoist wisdom and philosophy. Together with the Tao, The Way of ultimate health and longevity, these three ideals have been the greatest longing and dream for millions of Chinese to attain for thousands of years. Moreover, these two essentials also have been the tools for Chinese people to pray for luck, fortune, longevity, safety, happiness, and health. They are also the tools for xiu lian practice to purify and cultivate the heart and mind. Tao Calligraphy artfully brings these two together and maximizes their powerful impacts. 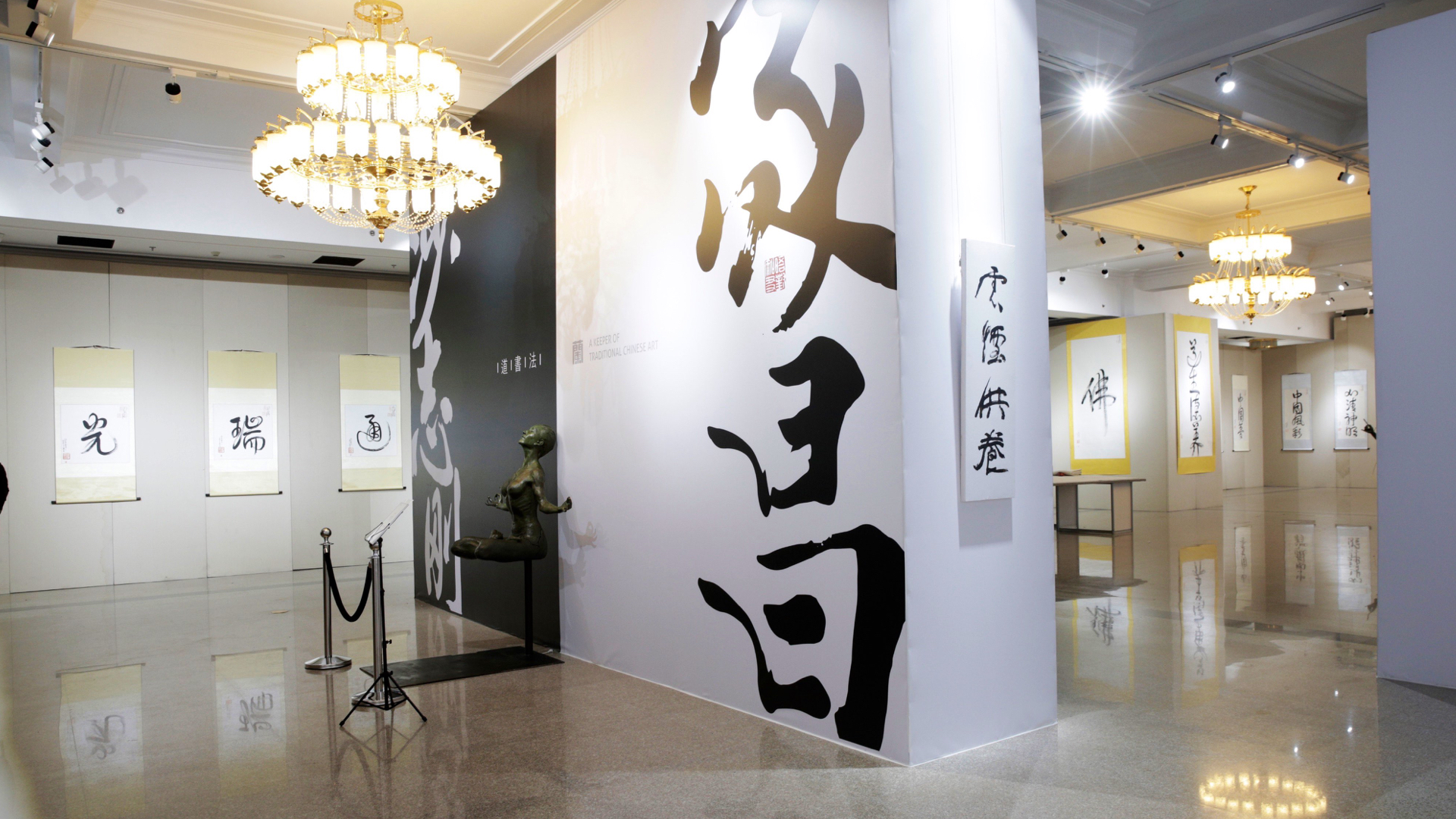 Tao Calligraphy is the unique style of Chinese calligraphy created by Dr. and Professor Sha. It is Oneness writing completed in one stroke. It is a unique calligraphy written within one breath and one qi. It is a sacred calligraphy with the breathtaking beauty of Hun Yun Yi Ti. Hun Yun is the Oneness field. Yi Ti is one whole unity. The form and shape of Tao Calligraphy are rounded，unobstructed, and flow freely. Tao Calligraphy reveals both roundedness and squareness. There are circles within the squares, and there are squares within the circles.

Tao Calligraphy emphasizes the resonance between strokes within one word as well as the harmony between words in one phrase. Every piece of Tao Calligraphy is an artistic representation of free-flowing and harmonious balance. Each stroke of Tao Calligraphy contains powerful natural life force. As a visual art form with such miraculous artistic beauty, Tao Calligraphy has been recognized as a collectible with priceless value by thousands of foreigners. Not only have they understood its precious collectible value, but many of them are also eager to learn how to write Tao Calligraphy.

Due to his exceptional contribution in spreading Chinese art and culture worldwide, as well as his extraordinary artistic attainment in Tao Calligraphy, the State Ethnic Academy of Painting was honored to appoint Dr. and Professor Sha to the positions of Shu Fa Jia (National Chinese Calligraphy Dr. and Professor), Yan Jiu Yuan (Honorable Researcher Professor), and National and Overseas Board of Advisors Consultant at the State Ethnic Academy of Painting.

Professor Wang Lingxu, member of the standing committee of the CPPCC National Committee, Chief Cultural Executive of the Cultural Palace of Nationalities of the State Ethnic Affairs Commission of the People’s Republic of China, and Dean of the State Ethnic Academy of Painting, believes that through Tao Calligraphy, Dr. and Professor Sha has spread the ancient art and cultural treasure of Chinese Calligraphy in a profound way. It has significantly magnified the powerful impacts of Chinese art and culture on the world. Chinese Calligraphy is an ancient art with more than two thousand years of history. But, Tao Calligraphy is unprecedented. As the creator of Tao Calligraphy, Dr. and Professor Sha is the pioneer artist in the 21st century for creating groundbreaking new Chinese artistic concepts.

Meanwhile, through his tireless efforts to spread Tao Calligraphy around the world, hundreds and thousands of foreigners not only have begun to learn more about Chinese people and Chinese culture, but they have also started to recognize the power and beauty of ancient Chinese art and culture. This is an exceptional contribution to bring Chinese culture to the center stage of the global world.

As one of the major committee members of the State Ethnic Academy of Painting, Jia Chang has explored and mastered a wide range of artistic media. He studied abroad in the United Kingdom when he was young, and has since travelled around Europe, America, and more.

Through his extensive study and travel experiences, he has gained and cultivated a broad range of knowledge and artistic skills. His art is deeply influenced by both eastern and western art and culture. Later, he developed a passion for traditional Chinese art and has devoted himself to explore ways to fuse eastern and western art and cultures together perfectly. Through bringing the international vocabulary into the genes of Chinese culture, he has made a significant contribution to the internationalization of traditional Chinese art. His works have been widely acclaimed by critics and loved by society worldwide.

The success of this dual exhibition featuring Tao Calligraphy by world-renowned Shu Fa Jia Chinese Calligraphy Master Dr. and Professor Sha Zhigang and “Lan (Orchid): A KEEPER OF TRADITIONAL CHINESE ART” by famous artist Jia Chang is another step forward to spread ancient Chinese art and culture. It is a positive contribution to spread Chinese culture to the wider world stage.

Stay up to date about all the events and happenings related to the Tao teachings. There are regular special offers and complimentary gifts that we would love to share with you.